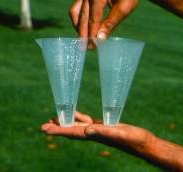 Sprinkler layout is very important for your overall sprinkler efficiency. Distribution Uniformity (DU) of the water is critical. Distribution Uniformity (DU) is a measure of how evenly water is applied across a specified area being watered from the same valve during irrigation. For example, if one inch of water is applied in one part of the same valved area and only half an inch is applied in another part of the same valved area that is poor DU. DU is expressed as a percentage between 0 and 100%, although it is virtually impossible to attain 100% in practice. DUs of less than 70% are considered poor, DUs of 70 - 90% are good, and DUs greater than 90% are excellent. We have seen DUs as low as 20%. 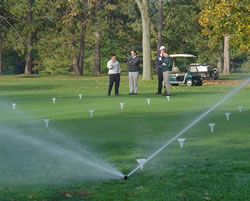 In short, bad DU means that you are probably watering part of your yard (on a particular valve) too much and another part too little. Most people will turn up the timer or water long enough to keep the area with little water green and lush, so that means you are over-watering the other area too much. With a 20% DU that means 5 times more water than was needed was applied.

This image shows the inefficiency of many sprinkler systems: