Don’t Prune: This small more compact form of Bougainvillea grows as a shrub and can be kept contained. Pruning should be kept at a minimum to preserve blooms. If your Bougainvillea (all varieties) is not blooming and it is not because you cut the flowers off you are probably over-watering it. This plant blooms best with minimal water. Also, Bougainvilleas stop growing so fast when you cut back the water. 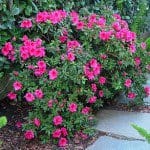 Pruning Azaleas should be undertaken immediately after they finish blooming (usually June or July). Major pruning of Azaleas later than that risks interfering with the development of next year’s buds. Begin by pruning off dead or injured branches, which could cause disease and insect problems in the future. Then prune back tall, gangly limbs shooting out of the top of the bush. This will promote a more attractive, compact shape.

This is one of the favorite hedges in Southern California. It grows fast and dense, it needs to be pruned often and planted where roots are not going to be a problem or planted with root guards installed. 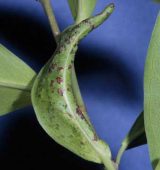 It is not unusual to find the leaves of your Ficus hedge curling up as shown to the left. Your plant probably has Thrip. When the leaf pod is opened very tiny white bugs and slightly larger black bugs- still very small become visible. It appears that this does not seem to damage or slow the plants growth down much but it is not aesthetically pleasing. Garden View Maintenance crews spray with Orthene™ or Malathion™ which eliminates the pest. Often we have to spray a couple times a year.

Eugenia myrtifolia (Syzygium paniculatum) is a very popular hedge and tree in Southern California. It is often plagued with psyllids. Infested plants often are not very attractive and leaves that have been infested and have been controlled will continue to have scars from the infestation (right). To combat the pest, researchers looked for its natural enemies in Australia. They found a tiny parasitic wasp, genus Tamarixia, that is stingless and smaller than a pinhead. The wasp was evaluated in a quarantined facility and then released at Disneyland in Anaheim in July 1992, and at the San Diego Zoo in 1993. Most native species of psyllids require no management; even when populations are abundant, plants can tolerate substantial feeding and psyllid populations will decline naturally. In locations that are visible Garden View Maintenance crews will control the insect populations by pruning often to remove scared leaves. Spraying Orthene™ or Malathion™ will eliminate the pests but will probably discourage natural enemies though this is often necessary where the plant is very visible. 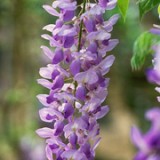 On established plants, this is the time of the first of three annual prunings. A good schedule for these three prunings is June, August and December. Cut any and all unwanted new growth to three buds above last years resting point. The point where the current years growth began and last years ended can be located by noticing the change in the stem/bark color. This pruning should be done to encourage flower bud development and to contain the size of the plant. 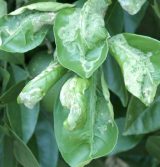 As citrus trees produce new flush growth, citrus leaf miners may become a severe problem (left). Citrus leaf miners are primarily a concern in young trees, but older trees that lose significant amount of foliage must be protected also. Natural control is not available. Care needs to be taken with chemical controls because plants have edible fruit. Garden View Maintenance crews spray with a product called Conserve™. The active ingredient in Spinosad is derived from a naturally occurring soil dwelling bacterium that has been formulated into insecticides provides the benefits of a biological pest control organism that does not significantly affect beneficial organisms including ladybugs, green lacewings, minute pirate bugs, and predatory mites. Esteban Casimiro (Garden View Maintenance Supervisor) adds that if you cut off the infected leafs and then spray the treatment is much more effective. 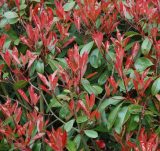 has finished blooming and its new flush red leaves are now no longer new and flush. It is a good time to prune this shrub to keep it compact.

Chlorosis on Gardenias, Azaleas, and many Shrubs

This is probably the most common and important problem on gardenia. Leaves appear yellow or chlorotic and have green veins. Growth may occasionally be retarded and highly symptomatic leaves may drop. In most cases, the condition is associated with the unavailability or deficiency of iron in the potting mix. Chlorosis can be avoided by using a fairly light, slightly acid potting mix. Applications of iron chelates in water may help to increase the availability of iron and cause the leaves to “green-up” within a few weeks after the application. Chlorosis in plants simply means that the plant doesn’t have enough chlorophyll. This can be caused by poor drainage, root problems, pH too high, or not enough nutrients from the soil, or a combination of all of these. Though Gardenias and Azaleas need sufficient water, overwatering will contribute to Chlorosis. Garden View crews will first fertilize the plants with a fertilizer that contains Iron. Esteban suggests poking holes about 4” deep and putting the fertilizer in the holes. If that doesn’t solve the problem more chelated iron will be applied. As a last resort the crews will often suggest replanting the plant in a peat moss based soil mix.

By thinning newly formed grape clusters you will encourage larger grapes. If you cut out about half of the cluster the plant will put its energy into the remaining grapes making them much larger.

These trees need their second semi annual feeding. A mature tree needs 2.5 lbs of actual nitrogen so if you are using a 20-6-8 fertilizer you will need 2.5 divided by .2 which equals 12.5 lbs put around the drip line of the trees. (See explanation of formula in above citrus feeding)

This is the most active growth period for warm-season grasses: Adalayd, Bermuda, Dichondra, St. Augustine, and Zoysia. Any of these grasses needs feeding now with a high-nitrogen fertilizer. It’s a good idea to water lawns both before and after you fertilize to lessen the chance of accidental burning and to hasten the benefits of the food. Lawns not to be fed this month are the cool-season bents, blues, ryes, and fescue. They’re entering a relatively dormant period now, feed them next fall.

Tender sub-tropicals really put on a surge of growth this month and their appetites grow larger to match. Feed bananas, birds of paradise, bougainvillea’s, citrus, fuchsias, gardenias, hibiscus, and many other plants this month. Use a high-nitrogen fertilizer. As with lawns, it’s a good idea to deep-water before and after feeding to speed fertilizer to the roots without burning or shocking plants.

Organic mulch serves many uses around the garden; it conserves moisture in the soil, insulates plant roots against high summer temperatures, reduces weed growth, and eventually decomposes to enrich planting beds. Choices include grass clippings, compost, bark, straw, and hay. (Spread grass clippings in a thin layer.) If you are lucky enough to have space for your own compost pile be sure to turn compost to speed up decomposition, use a spading fork to move material from bottom to top and from sides to center of the compost pile: moisten the compost during the process.

There’s still time for Johnny-come-lately gardeners to have a colorful summer. Reliable choices to plant this month include asters, ageratum, carnations, begonias, impatiens, lobelia, marigolds, Madagascar periwinkle, petunias, phlox, portulaca, sweet alyssum, verbena, and zinnias. Most of these plants are available in flats, six-packs, or 4-inch pots; a few are available in 6-inch pots.

The sweet taste of homegrown vegetables is only weeks away if you start now. From seed, plant beans beets, carrots, chard, corn, cucumbers, melons, okra, pumpkins, radishes, squash, and turnips. Plant seedlings of eggplant, peppers, and tomatoes. Be sure to pick all beans, cucumbers, okra, and squash as they ripen. Otherwise, fruit left on the vine and allowed to grow too large will lose flavor and drain the plant’s energy, resulting in a smaller remaining harvest.

With warm weather’s onset, aphids, thrips, and spider mites often seem to appear from nowhere. A h3 blast of water from the garden hose is usually enough to dislodge aphids and spider mites from plant leaves. But thrips usually live protected inside flower buds, where their feeding activity results in distorted blooms. Control thrips on ornamentals with a systemic insecticide; follow label instructions.

Our relatively dry winter and soaring temperatures mean that established trees, shrubs, and ground covers can’t rely on moisture stored in the soil-you’ll have to deep-water, However, irrigate new plants with regular, shallower watering until their root systems are better established. Water early morning and evening to reduce losses to wind and evaporation.

You can win the battle of summer weeds this month. Hoe, pull, or spray late-germinating volunteers now and you should sail through a mostly weed-free summer. Remember the key to weed control is to remove the weed before it flowers and set seeds.